We use cookies to provide you with a better experience. By continuing to browse the site you are agreeing to our use of cookies in accordance with our Cookie Policy.
Home » Costco poultry complex to have retail ripple effect

DENVER – Costco Wholesale’s decision to bring chicken production in-house, if successful, will be a model for other retailers to follow, CoBank’s Knowledge Exchange Division said in a new report. CoBank is a $131 billion cooperative bank serving agribusinesses and rural power, water and communications providers across the United States.

“We see the decision by Costco to bring its poultry supply in-house as a result of three primary drivers—surety of supply, visibility up the chain and cost control,” said Will Sawyer, lead animal protein economist at CoBank. “The ability to control the consistency of bird weights enhances food preparation and safety. Locating the facility in Nebraska also provides access to feed at favorable costs, a reliable water supply and a comparatively advantageous labor market.”

Costco broke ground on its Fremont, Nebraska-based Lincoln Premium Poultry facility in 2016. The project is scheduled for completion in September 2019. The complex will include a 250,000-sq.-ft. processing plant, a 75,000-sq.-ft. hatchery and a feed mill and comes with a $300 million price tag. Lincoln Premium represents the first time a retailer has assumed the risks associated with meat production — from farm to fork.

CoBank said Costco’s rotisserie chickens have a become a major driver of customer traffic at its warehouse stores, and in-house production is expected to save the company 10 to 35 cents per bird. Costco’s sales of rotisserie chicken have seen 8 percent growth annually since 2010 which is three times the growth rate of total poultry consumption in the US. During this time, the company has maintained a $4.99 per-chicken price point, according to CoBank. 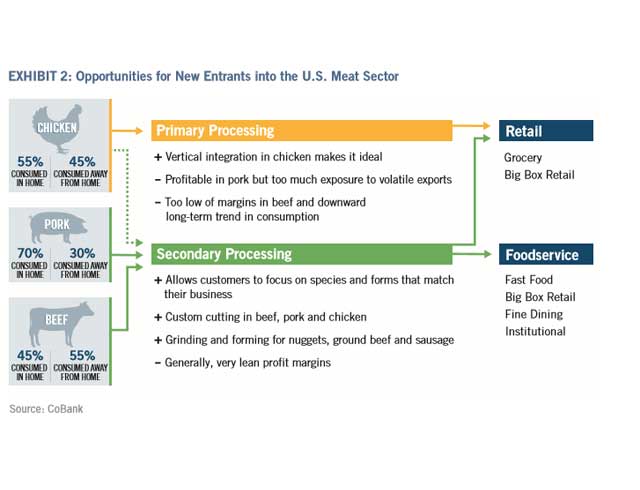 In its report, CoBank noted that “…Costco’s rotisserie chicken is so popular with its customers that it has its own Facebook page with over 10,000 followers and is referred to as “CRC.” This is a product among few others that serves as an important traffic driver for the retailer’s average store size of 145,000 square feet. The rotisserie chicken section is strategically placed at the back of the store.”

However, supplies of whole-bird chicken have declined — just 10 percent of poultry is sold as whole bird today, down 22 percent from 30 years ago, according to CoBank. “Furthermore, as an increasing share of poultry is being sold as parts or further processed products, bird weights have continued to climb with less than a quarter of the birds raised in the US today meeting Costco’s weight requirements of six to six-and-a-quarter pounds,” CoBank said in its report.

Sawyer added that the poultry sector presents the most appealing opportunity for retailers to build a fully integrated supply chain. However, Costco’s approach in other protein sectors, such as beef and pork, could present significant risks and challenges for retailers.

“Food retailers will need to evaluate a number of risks in order to justify the investment of time and capital required to build their own production capacity,” Sawyer said. “Beef packers have historically yielded very tight margins, and with declining per capita beef consumption the sector would be unlikely to meet its return objectives. Pork processing brings the risk of very large exposure to export market risks. Additionally, retailers will need to consider food safety risks, negative profitability in production and whole animal utilization to justify such investments.”

The retail industry will be watching closely Costco’s foray into poultry production, CoBank said, because if the wholesaler is successful its competitors will start rethinking agricultural supply chains and business models.