There’s a certain piling on happening in the sliced lunch meat category. That’s the goal of manufacturers, of course – to have consumers pile on more meats on their sandwiches, wraps or other meals – but it’s also true in the scope and type of deli meat packages on the market today.

From flexible, resealable packages displayed on pegs to lidded tubs and containers to stand-up pouches and grab-and-go bags, packages of sliced lunch meats are designed with easy fixings in mind for the end user. Within those packages, there’s somewhat of a variety show going on, with more organic/natural cuts, different flavor profiles and various thicknesses.

The diversity of packages and products reflects the need to stand out in a competitive protein marketplace. According to information from New York-based research firm Nielsen, dollar and volume sales for deli meats (including bulk and packaged) have dipped over the past few years, spurring brands to invest in product development and packaging and ultimately deliver products that fit into consumer’s interest in convenient, flavorful proteins as part of their daypart eating.

Price and packaging are more important to buyers of pre-packaged products.

Within the deli meat sector now vying for relevance and sales, packaged deli meats have an edge in preference over sliced-to-order bulk processed meats. Nielsen reports that more than half (52 percent) of all lunch meat shoppers are “package heavy” buyers, spending at least 70 percent of their category dollars on packaged deli meats.

Such shoppers of packaged products have distinct priorities when browsing. Nielsen’s research shows that price and packaging are more important to buyers of pre-packaged products, meaning that packaged meat buyers likely will be hesitant to go overbroad in paying for those items. As a testament to the importance of price, sales of private label pre-packaged sliced deli meats are impacting the lunch meat category, according to Nielsen’s report on deli meats.

To engage the loyal, package-heavy buyers, attract new shoppers and stem any losses to other proteins or prepared foods, many deli meat processors have invested more in packaging technology.

Package design remains a key element. As Nielsen’s recent report points out, packages of deli meat that highlighted the products’ fresh attributes can help level the playing field with other fresh choices in and around the deli.

Packaging for the newer line of Prime Fresh Delicatessen deli meats from the Smithfield, Virginia-based Smithfield Foods brand is designed to convey that freshness. The packaging is described by the company as minimalist and designed to “look like the meat was just sliced at the deli counter.” The bagged format is also in line with another trend in packaging: it uses 31 percent less packaging than a tub format. 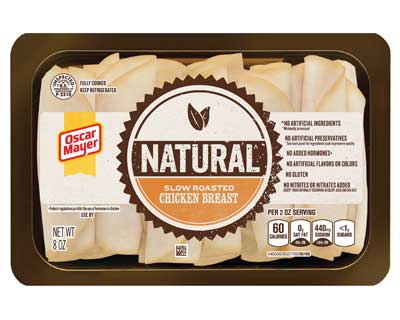 Other general food trends are showing up in packages of sliced deli meats. Ongoing interest in organic and natural deli meats, for example, has ratcheted up smaller brands and caused larger, traditional brands to add organic and natural varieties with packaging that signals the attributes of those products. Organic, natural or minimally processed products from big-name brands like Oscar Mayer and Hillshire Farm typically have a natural look to the package, with neutral or green colors and minimalist graphics.

Specialty brands also recognize the marriage between their organic products and packaging. North Country Smokehouse, an artisanal meat processor based in Claremont, New Hampshire, recently launched a new line of clean label turkey and ham deli meats that are deemed organic, certified humane and all natural. As a point of difference, the deli meat is marinated and cooked after packaging, utilizing sous vide technology then smoked to impart that flavor. The resealable packages start at a retail price of $4.99.

Another new player in this space is Organic Valley of La Farge, Wisconsin, which has moved beyond dairy with a sister brand of ready-to-eat meats. Organic Valley’s organic deli meats are available in an easy-to open, BPA-free, recyclable, peelable tray in seven varieties, with a suggested retail price starting at $5.99.

One area of concern with organic and natural packages of deli meats is shelf life, which is typically shorter than traditional processed meats. Various product and packaging solutions address that issue: The Land O’Frost brand, for example, adds a freshness pack to packages of its Simply Delicious line of lunch meats, comprised of food grade iron powder.

Ingredient suppliers are also devising ways to extend shelf life, like Des Moines, Iowa-based Kemin Food Technologies, which has developed a natural preservative made from a combination of rosemary and green tea extract. “The market for natural meat and poultry products is strong and continuing to grow amidst clean label trends. The influence today is on not only how to put cleaner words in an ingredient deck, but to determine how those changes enable front-of-pack claims,” remarks Amanda King, technical manager, proteins. 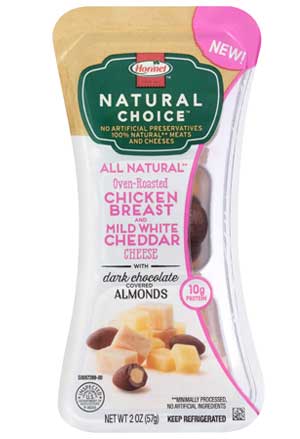 Meanwhile, as Americans keep snacking, that macro trend has also impacted the packaged deli meat section. Manufacturers seek to meet the craving for protein snacks with products that include smaller portions of sliced deli meats. The Boar’s Head brand, which offers a variety of sliced prepackaged deli meats, has added a line of “Take Along” snacks that include pre-sliced Italian-style meats (Genoa salame and sopressata) and provolone; the Niman Ranch brand also sells a snack pack with sliced meats, as does the Organic Valley brand, which has come out with a snack kit that includes cheese and smoked summer sausage.

For those who don’t want or need other items when snacking on deli meats, there is an option in Land O’Frost’s new line of Deli Snackers, baked meat snacks that are a hybrid of deli lunchmeats and dried meat snacks. Taking that a step further, the newest evolution on slices of meat is Land O’Frost’s recently launched Gone Rogue high protein crisps, which are high-quality meats that have been turned into a crispy, shelf-stable chip.

To help manufacturers produce packages of sliced deli meats, equipment suppliers have focused on their own improvements and capabilities, including packaging materials and equipment.

With the rising (and largely consumer-led) movement to reduce packaging waste, Bemis Co. Inc., Oshkosh, Wisconsin, for instance, is offering its SmartTack EZ Peel resealable packaging that enables a longer shelf life and less food waste, due to less materials.

Closures for deli meats are also important, for ease of use and quality. Land O’Frost, for its part, uses a press-to-close ZIP-PAK DoubleZip closure for its premium, deli shaved, Bistro Favorites and sub sandwich kit lines.