Striving for a high-water mark

When you are a small meat business in a small town that gets a heavy influx of ‘big city’ customers, you have to do things a bit differently. It is that understanding that keeps Lake Geneva Country Meats in Lake Geneva, Wisconsin, a cut above most of its competitors.

Nick Vorpagel, manager and vice president of business development, and the one in charge of all things digital at the 53-year-old processing company, says his toughest task is trying to meet customer expectations.

“People will come in asking for things we do not have, and we need to be able to explain why we do not provide a large selection of grass-fed meats,” he says as an example. “Some will tell us that they can get it from Amazon in 24 hours. But when we can let them know why we’ve selected our fresh and processed meat products, how they are prepared, other positive attributes about them and why our line-up may have significant benefits for them, they realize we know what we’re talking about and they will listen.”

It’s not that the 15,000-sq.-ft. business doesn’t offer alternatives for most tastes. They make over 30 varieties of bratwurst (including portabello mushroom and swiss and cherry brat versions). They have also racked up hundreds of plaques and awards in state, national and international cured meats competition, and have been featured in “Discover Wisconsin,” a state-wide television program.

But Vorpagel contends that you can’t do all things for all people when you are on a shoestring budget. “We have to put our emphasis on making superior products and offering the best customer service. Since the current plant location was purchased in 1967, we’ve gone through expansion programs 13 times...something that says we may be on the right path.”

Vorpagel is the grandson of the late John and Rita Leahy, who founded the company next to the family farm in 1965. The Leahys laid the foundation for the business and developed it to the point where they were inducted into the Wisconsin Meat Hall of Fame in 2003. A major expansion of the highway in front of the plant resulted in the demolition of the family farm and increased traffic much closer to a four-lane highway. 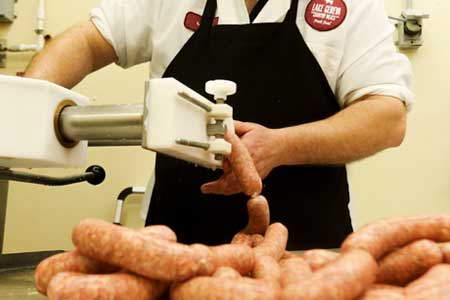 His father Scott Vorpagel, company president and CEO, married his mother Kathy, a second-generation member of the Leahy meat family. She serves as retail manager for Lake Geneva Country Meats.

Vorpagel worked summers at the meat business in his younger years, earned a degree in political science and began law school. He quit law school when he found that he was better suited to work for the family business.

“I liked food, working with the folks in the family business, and dealing with customers,” he reflects. “I was always involved with some project at the plant. It seems those projects never stopped for me, but they all centered on listening to customers and thinking how to make things better for them.”

At 31, Vorpagel has tackled assignments like marketing and advertising, community projects, sales, pricing and new account development. One of his favorite local events is the annual Lake Geneva Restaurant Week where customers get a chance to vote on one of five local charities who could be chosen to receive a $5,000 donation from the company. They’ve done this for each of the past four years.

Like all meat businesses, Lake Geneva Country Meats has a difficult time finding quality employees. They have 45 full-timers and that number sees little decline after the summer tourist season.

“We look for employees who are personable, friendly and out-going and will actually listen to the concerns of customers,” Vorpagel explains. “We can always teach them how to cut or wrap meats, but we first seek their ability to relate to the customer.”

The business uses some print advertising but stands out on local radio with a weekly cooking show that explains how to use various meat cuts and how to best prepare them. 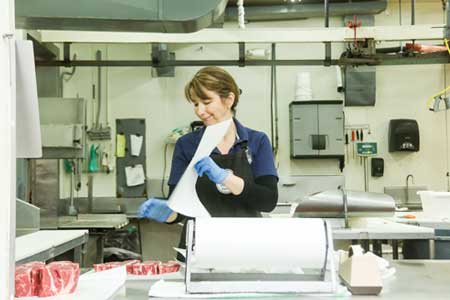 Customer friendliness is a hallmark value at Lake Geneva Country Meats. They actually refer to their service counter personnel as “Meat Ambassadors.” As their website, lakegenevacountrymeats.com, details, “just like diplomatic ambassadors to foreign lands share knowledge of their home country, our Meat Ambassadors are here to share their knowledge about meat with you. They’re so much more than just mere sales clerks, they’re your friendly resource to learn more about meat.”

Vorpagel also devotes a section of the website and the retail store area to wine and independent locally brewed beers that pair well with certain meats and poultry selections offered at Lake Geneva.

In addition to featuring video recipes on the website, the company also shows a virtual meat showcase on screen that lists various cuts of beef, pork and poultry and identifies tenderness profiles for each cut, including an app that viewers can download to their personal phones.

Lake Geneva has taken its website and social media customer relations to an even higher level by offering its customers a Flavor School program.

“We know customers need help and are looking for new meal ideas, so we decided to give them a program where there are meals available based on the type of cooking and meal they prefer,” Vorpagel says. “We want to keep things exciting and new in the Flavor School feature. We don’t want to be too complex or appear to be above the person looking for help. We just want to give them simple good food pairings we think they will like and try to make.”

“Most of these meals were developed in-house, but we are also pleased to share ideas we get from the beef or pork groups as well.,” Vorpagel says. “Maybe this concept is a step to keep Amazon away because we offer something more personal than just a commodity. If I get a meat question I’ll try to answer it in minutes on the internet or Facebook, unless it’s late at night. I’m guessing that many of those large companies are not willing to offer that individualized service to that degree.”

Name the meats or specialty products, from hams, bacons, sausages, beef tongue, snack sticks or fresh cuts and you’ll likely find them in stock at the shop.

Vorpagel says the family business will likely continue its growth pattern and last year added a new smokehouse to the equipment inventory.

“We want to move heavier into dry-cured sausage since more customers are looking for it,” he notes. “In the fresh sausage area, we are looking into Korean and North African flavors. Adding new flavors is an old idea but one the customer tunes into. We are also thinking more about developing a meal kit program and perhaps using local partners to help bring that about.”