We use cookies to provide you with a better experience. By continuing to browse the site you are agreeing to our use of cookies in accordance with our Cookie Policy.
Home » Excellence in operations

IBP had a reputation for many years for being a successful company because of the resiliency and toughness of its leadership teams. That reputation was established by the company’s iconic leader, Bob Peterson. Rupp adapted and embraced the culture to ensure his long-term success, including the stability and job security he sought from day one.

Rupp says he learned plenty during those early years. When asked about the influence of working under Peterson, he references the principles of success often attributed to him that he strives to live by. A copy of those principles still hangs in Rupp’s Dakota Dunes office today. It reads:

“Truth. Be up front, blunt and clear. Take a position. Lead don’t follow. Be fair. Be firm. Teach Don’t tear down. Get to work early, do something and then leave late. If you don’t care who gets the credit, you can go a long way.”

Rupp says in his role today, the “be blunt” statement has been modified at Tyson to “be candid,” and it remains an essential principle of his leadership style. He prides himself on candidness with his team and believes they are all clearly aware of where they stand when it comes to meeting expectations and their performance.

“I honestly think that if you’re not candid with people you are doing them a disservice,” he says. “But the way you’re candid with them can make all the difference in the world.” 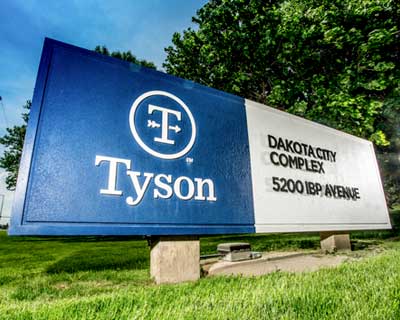 The expansion of the cutting floor at Dakota City is one of many crowning achievements made by Rupp and his team in 2006. He is proud of the finished product, which is a 140,000-sq.-ft. fabrication floor that combined three rooms and now accommodates 1,100 workers per shift working on one of the nine lines where daily capacity is well over 7,000 head. At that time, he was the plant manager. “That was my passion for about four years,” he says, and it was indeed, a labor of love with an outcome that is a source of pride for the company and Rupp’s team. “Between helping to design, build and run it, I think we’ve come up with one of the most modern cut floors in the industry,” he says.

Just after the renovation to the cut floor, the harvest floor at Dakota City was started. This massive undertaking involved building a new slaughter floor at the plant, which began operation in 2015. The investment pushed the slaughter capacity from 4,800 head per day to about 6,000 head. Early in that process, in 2012, Rupp assumed his current position at the corporate office and brought Jason Poole to Dakota City to assume his previous position and to see that project through to the finish line.

Like many industry veterans who’ve worked their way up the ranks, Rupp benefited from the insight and influence of others who took the time to share their knowledge and experience.

Jerry Karczewski is a name Rupp readily offers as one of those people who had a profound influence on him. Among other things, Rupp remembers Karczewski as the first person to hire him as a supervisor and later Rupp worked under him as a general foreman. “He always had those words of wisdom,” Rupp says. “He did it right when doing it right wasn’t cool,” he says, touching a lot of lives in his career. “I honestly have more respect for that man than any five,” he says.

That admiration is mutual, according to Karczewski, who worked at IBP for years and ultimately retired as an operations executive at Cargill. The two crossed paths when Rupp was an hourly worker in the early 1980s.

“Chris was a local guy who was pulling paddle bones on one of the chuck tables,” Karczewski recalls, adding that Rupp was a hard worker whose leadership qualities made him stand out. He wasn’t surprised when he soon became a production supervisor. “He was a hard driver in pursuit of goals assigned to him. He had a good ability to organize groups of people in the most efficient way to get a task done, and commanded respect from the people that worked for him, as well as his supervisory peers,” says Karczewski, who left IBP in 1994, after Rupp had been promoted to general foreman. He wasn’t surprised to see him advance in the years to come, given his skills. “He also demonstrated a proclivity for innovative thinking; he was very good at looking at plant production setups and coming up with creative ways to make a layout better and more efficient. I always thought he had a little bit of the engineer in his heart,” Karczewski says. “I have followed his moves to Dakota City and Dakota Dunes, and I’m not a bit surprised he’s achieved the level of success he has.”

More recently, Rupp says people he’s worked for, like Tyson veterans, Steve Stouffer, Leo Lang, Dan Brooks and Chad Martin, have all been positive influences in his development and their impact has been very beneficial. Paying it forward to the next generation, Rupp has had the opportunity to pass down his knowledge to up-and-comers in the industry. For example, Tony Lang (Leo’s son) is working for Rupp as a successful plant manager at the Finney County plant, Paul VanWassenhove at the Joslin facility and Jason Poole, who was hired right out of college to work with Rupp and his team in Finney County and went on to work as the complex manager at the Dakota City plant.

While he moved into an office at the corporate office in Dakota Dunes about six years ago, Rupp still feels like his biggest contribution is in the plants, teaching and planning for the future one step at a time. “I’m more at ease and happy when I get to the plant,” compared to the day-to-day routine at the corporate office. A typical workday in his current role is about 11 hours, a far cry from when he was working in the plants every day and logging closer to 14-plus hours each day. He says the regimen of working in a corporate role is a huge adjustment compared to the decades he spent in operations, overseeing six beef plants, including one of the country’s largest, which spans about 1.8 million sq. ft. and employs upwards of 4,000 workers.