We use cookies to provide you with a better experience. By continuing to browse the site you are agreeing to our use of cookies in accordance with our Cookie Policy.
Home » Excellence in operations

“I watched my dad retire with nothing and I knew that wasn’t for me,” Rupp says, so he applied for a maintenance position at what was then IBP Inc. in Finney County, Kansas. After finding out there was a six-month waiting period for most maintenance jobs at that time in the industry, Rupp heard there were more immediate openings working on the fabrication line at the giant plant. “I told them I wouldn’t have a clue about how to cut meat,” but he was assured that he could easily be trained.

He took the job working as a meat cutter and was pleasantly surprised by the predictable regimen of his new role compared to his previous on-farm employment. It was almost shocking, he says.

“They paid me for every hour I worked; if I worked overtime they paid me time-and-a-half; I knew what my schedule was going to be every day,” which were all things he wasn’t at all used to, but he quickly learned to appreciate, all while learning the craft of cutting meat. He went on to learn about 20 other jobs on the processing floor and supervisors soon saw Rupp as a prime candidate to move up in the company to supervisory roles. However, these were opportunities he routinely declined. “I don’t really see myself making a career out of this,” he would say when approached about potential promotions. He had a different career path in mind. “I didn’t know for sure what, but I knew it wasn’t going to be working in the packing house,” he says.

While working at IBP, Rupp didn’t use many of the skills he learned on the farm as a kid. Discovering how things work and building things came easy to Rupp. “Still today, I love carpentry. That’s my outlet, I guess you’d say.” He even worked as a carpenter as a side hustle back early in his career at the beef plant. From roofing to deck building to pouring concrete, Rupp had a gift and a love for construction and with a more predictable schedule, he picked up plenty of jobs requiring his expertise.

When he was given the chance to take a promotion that didn’t require hours of cutting meat at the plant, Rupp had to make the difficult decision to give up his extra job as a carpenter to focus on his career. The stepping stone into management began with Rupp being given the chance to start up a program for training new workers. This would include teaching new employees how to use knives, sharpening knives and any skills specific to the part of the plant they were hired to work in. As one of the first 12 trainers in this new initiative, Rupp found himself bored with the job after about six months. “It wasn’t moving fast enough,” he says, “so I went into a supervisor position,” which was anything but boring. The fast and furious pace of this role challenged Rupp. It taught him to respect the supervisors as some of the hardest-working employees in the plants to this day. 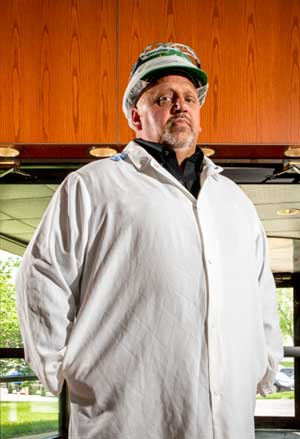 “That was a jolt to the system,” he recalls of the rigorous and demanding work. After working as a supervisor for about nine months, Rupp transitioned to what was known as a floater, filling in for other supervisors and working on special projects. As he pursued the next rung of the corporate ladder, which was to be a general foreman, he was required to work as a training coordinator. It was then he learned something about himself and his skill set. “I’m a lot better at training people on how to cut meat than I am in a classroom training environment,” he says, and at about the time he realized this, a night-shift general manager position became available, which he eagerly stepped into. The transition, he says, was natural and comfortable.

In 1999, he applied for the operations manager position at the plant and got it. That was when he had to stop the side hustle. The Finney County plant wasn’t growing much at that time, so Rupp moved to the mammoth Dakota City, Nebraska, plant just after Tyson acquired IBP in early 2001. It was a lateral move to be the operations manager there with the plan to take over as general manager in two years, filling the position of a retiring GM.

The transition wasn’t jarring from a volume standpoint, as both plants were about the same in terms of operating capacity. For a variety of reasons though, “the first year here was the toughest of my career,” as he adjusted to a new plant in a different state, working with new employees after uprooting his wife and family to live in a community where they didn’t know anyone. One significant workplace difference was that Rupp went from overseeing a non-union plant in Kansas to a union plant in Nebraska.

But looking back, he says, “there are great people here and you just have to get to know them.” He is thankful too, for the support of his wife, Daneen, who dedicated herself to making the transition for his family as seamless as possible and continues to play a vital, behind-the-scenes role in Rupp’s success.

In 2006, he became the plant manager in Dakota City.

During the years working fulltime in Dakota City, leaving in 2012 to work in the corporate office of Tyson Fresh Meats in Dakota Dunes, South Dakota, “I was very proud of what we accomplished as a team through my 12 years at this facility,” he says.

Looking back at that era in the industry and at that point in IBP’s evolution, the business structure was very much command and control and falling in line was part of the expectations. “I learned coming in that the meek didn’t survive,” Rupp says.