We use cookies to provide you with a better experience. By continuing to browse the site you are agreeing to our use of cookies in accordance with our Cookie Policy.
Home » Quantifying meat case buying decisions

IDAHO FALLS, Idaho – When it comes to what influences consumers’ retail meat purchases, demographics often determine priorities, according to results of a survey by Category Partners (CP). Price, type of meat and appearance are well documented and established factors, but attributes such as production claims, health and wellness and the origin of the products are becoming more important. The CP research included 1,000 consumers between the ages of 21 and 65 who were asked to identify the five most-important factors from a list of 20 that they use when making purchases from the fresh meat case. Not surprisingly, quality/appearance (47 percent), type of meat (47 percent) and price per pound (46 percent) were the top three attributes of respondents, which represented multiple races household sizes and income levels. Flavor/taste (39 percent), price per package (37 percent) and cut of meat (37 percent) were the next most important factors according to the survey. 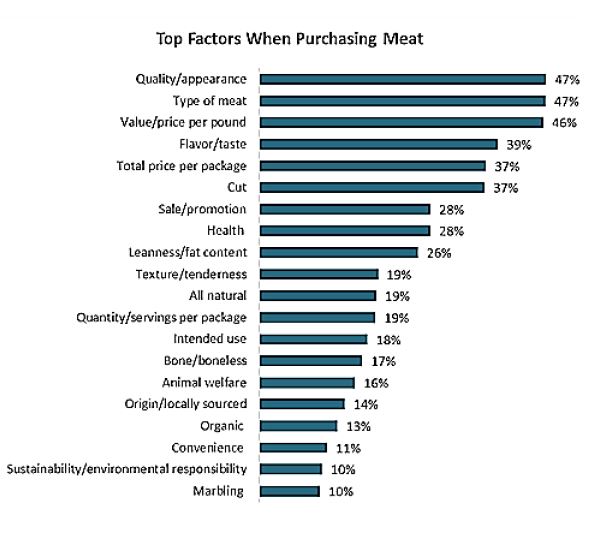 Priorities varied among gender, age and race, however and factors included in these categories of respondents included origin/locally sourced, animal welfare claims and health. According to the survey:

According to Cara Ammon, CP’s director of consumer research, “Aside from quality and price, which always have been important to consumers, a significant number of today’s meat shoppers are more concerned about how their meat was raised, where it originated and its impact on their well-being.”