Georgia Tech Research Institute (GTRI) senior research technologist and project director Sean Thomas remembers the robots he worked with at the beginning of his research career. The sheer size would intimidate people. Most robots were placed in cages for the safety of humans working alongside them.

These latest robotic advancements are being used to develop potential poultry processing solutions for strenuous and repetitive jobs.

Researchers at GTRI’s Agricultural Technology Research Program are experimenting with a robot’s ability to learn how to pick and place chicken front halves on cones for deboning and further processing. The use of robots in this manner is known as co-robotics. The machines are designed to work safely alongside humans in many production tasks.

During the experiment, the group taught a two-armed Baxter robot designed by Rethink Robotics, which weighed around 160 lbs., to perform this task.

The Baxter robot also comes with a complete safety system that makes it feasible for people to work near it without extensive additional safety measures.

Sim Harbert, a senior research engineer on the project, saw how important it was to bring some human qualities to the robot – that way a worker would be more comfortable working alongside it.

“I think that’s going to be important – and this one even had a face – so that is something familiar to people,” Harbert says of robots having human features when they work with poultry plant employees. “It can show that it’s looking at you or noticing you or even has a problem. We even made it have a ‘frowny’ face when it realizes something is not working and not able to pick up the bird.”

The deboning line process is becoming automated, but the loading of chickens is still a manual labor job. Thomas is hoping workers can eventually guide a robot as opposed to doing the repetitive task themselves.

“Now the employee doesn’t have to do all the physical work; they can sit there and assist the robot in doing that work,” Thomas says.

In a typical poultry plant, chicken front halves are lifted from a hopper by workers and placed onto moving lines of cones for deboning. Employees have to deal with different sizes of birds while also keeping up with the production line.

Doug Britton, Agricultural Technology Research Program manager at GTRI, oversaw the project and was pleased with the early results.

“When you start thinking of tasks for automation you want to think about those tasks that are highly repetitive, that don’t really require significant skill or significant decision making,” Britton explains. “Those are the early entries for automation technology, plus we didn’t see a lot of people working in that space. So, from a research perspective, it’s a real interesting application to kind of prove out some automation and sensing technology.” 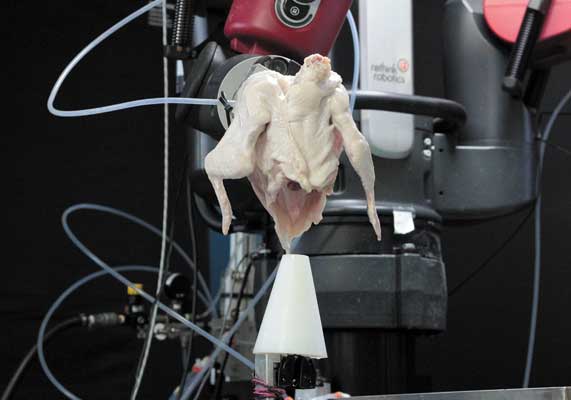 Put to the test

For the experiment, the GTRI team set up a trial work area. In the controlled space for the Baxter robot, the first step of the process was that the chicken was put down a chute. This step simulated what it would be like in a poultry facility. Then, the Baxter robot used 3D sensor technology to find the best location to grab the chicken front half. Once located, one of two arms reached out to grip the carcass and pick it up.

After the robot secured the front half, it moved it into view of the 3D sensors to determine its orientation and then it was placed on the cone. The robot then waited for another carcass to come down the chute. Since the robot uses two arms, one arm can start grabbing another poultry item after the other arm is out of the way.

If the robot fails in picking up the front half, a human operator will assist. From the initial tests in 2017, the Baxter robot had a 90 percent success rate at grabbing and placing the front half on a cone.

With new areas of testing, Harbert understood the importance of having a Baxter experimental robot that could be manipulated to perform a specific task before picking up repetitive motions.

“It’s more bare bones because it lets you control everything on the robot almost, but you end up having to write a lot of the control software,” he says.

Thomas explains that using the correct robot did make for clear results on the project.

“It’s pretty adaptable on its own. It’s not like we have to program it to cut a specific bird,” Thomas says. “It’s sort of self-training based on the software developed.”

Thomas and Harbert see substantial progress in the research side, but for this technology to move forward, it would have to be applied to different robots and modified to operate in harsh plant environments.

“The Baxter is a great tool to test out our algorithms and coming up with the modules that would go into the system, but the Baxter itself is probably not the right robot to go into a processing plant,” Harbert says. “It’s a little bit slower than some other robots and we’re working as much as we can to make it go as fast as it can go. It’s not really meant for the washdown environment of a poultry plant. Usually, at the end of the second shift, they hose down everything with a caustic cleaning solution and high-pressure water and the Baxter would have some problems with that.”