We use cookies to provide you with a better experience. By continuing to browse the site you are agreeing to our use of cookies in accordance with our Cookie Policy.
Home » Beyond Meat opens innovation center

The company’s “Manhattan Beach Project” is seven times the size of the existing facility and is designed to support the scientists, engineers, food technologists, chefs and managers tasked with iterating Beyond Meat products “…until they are indistinguishable from their animal protein equivalent,” the company said. 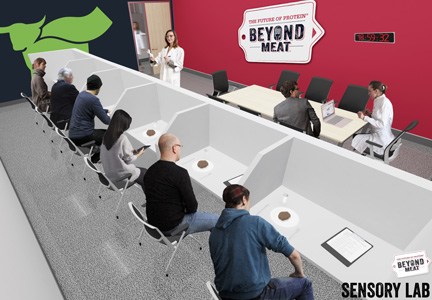 The center is divided into eight distinct laboratories and footprints with an emphasis on consumer engagement, according to the company. The Manhattan Beach Project also includes a test kitchen that will host chefs and culinary experts and a formal sensory lab for consumer tasting and product testing of its plant-based protein products.

“The use of science and technology to build meat directly from plants, coupled with a commitment to all natural and non-GMO ingredients, is the core of our company. At Beyond Meat, we strive to understand meat at new levels, and then rebuild it using amino acids, lipids and minerals from plants. What the animal has done throughout history — organize plant material in the form of muscle or meat — we believe we can do more efficiently to the benefit of human health, the environment and animal welfare,” said Ethan Brown, Beyond Meat CEO and founder.

The company expects to create 50 new jobs over the next year at the Manhattan Beach Project facility. Beyond Meat is working with universities and research centers to identify and recruit talent to work at the facility.

“The path to the perfect build of meat from plants is both long and steep, but with every iteration we are getting closer and closer,” Brown Said. “I am so pleased to join our special group of scientists, engineers, chefs and managers in announcing the opening of our new state-of-the-art innovation center.”

Beyond Meat is the maker of the Beyond Burger, which the company says looks, cooks and tastes like ground beef from cows but is made from plants. The company already has distribution to 27,000 grocery stores and restaurants in the US.

“Beyond Meat’s products are a game-changer and I’m honored to be here today as we mark this important milestone in the company’s history,” Hopkins said. He joins a growing list of professional athletes who are backing Beyond Meat, including former NFL tight end, Tony Gonzales.